The rush for NFTs took exactly ten months. Your hangover will be much harder and longer

We were all stunned when we saw how the NFT of a digital work sold for $69 million. It suddenly seemed logical to invest 1.36 million for a pixel’s NFT, but gradually the phenomenon disappeared. There are those who try to continue to bet on such assets, but the truth is that the market that had already hit rock bottom is now almost collapsed.

Who saw you and who saw you. In January 2022, NFTs were at the top of the wave, and that’s how the future seemed. These digital assets generated $17.2 billion in trading volume, according to Bloomberg, but the story has changed and according to Dune Analytics in September the volume was just $466 million: 97% less than when the year started. 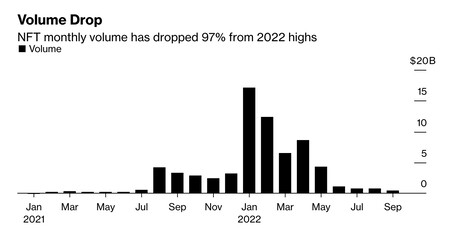 A steady and steep decline. Transactions of these non-tradable tokens have been falling for months. It should be noted here that NFTs based on the Ethereum network performed particularly poorly, while others based on Solana did not perform very badly.

But there are still believers.. The market may be at (very) low hours, but there are still companies and individuals who rely on NFTs. LG recently added NFTs to its TVs and HTC wanted to use them as a selling point in their latest smartphones. Square Enix will also bet on this technology, but a CryptoPunks NFT was sold in addition to it today. 4.5 million dollars.

… and many investors. What’s intriguing about the Dune Analytics data is that while the number of transactions has dropped drastically, it reflects that the overall number of investors hasn’t dropped that much: in September, it was just over 42,000 when it peaked in March of this year. It was 66,000. In a way, it makes sense: Investors who have already invested are “stuck” and idle waiting for the situation to improve.

If crypto goes bad, NFTs go bad too. This decline is a direct result of the collapse in the value of cryptocurrencies, many of which have lost much of their value since November 2021, when they reached all-time highs. Reaching $68,000, Bitcoin is currently around $19,000 and Ethereum, which has surpassed $4,500, is currently just over $1,300, but after the ‘Merge’ there may be changes.

And the SEC is tightening. The regulatory body in the US has now stated that the Ethereum PoS mechanism makes it look like a loan and therefore can be regulated as such.

SEC chairman Gary Gensler has gone even further these days, adding an almost imperceptible message in a civil lawsuit against a ‘crypto influencer’: The nodes of the Ethereum network are “clustering more densely” in the US, he said.

From there, it was suggested that all Ethereum transactions worldwide should be considered US origin and therefore fully regulated there. The case is yet to be resolved, but this message is alarming for the decentralized future of this network.