How to make autonomous cars safer? It seems to give him a pair of puzzled eyes

As the world embraces the future of autonomous driving, questions arise about the safety of this mode of transportation. In fact, Tesla’s system has already encountered regulators who aren’t convinced it works. Many critics argue that with these vehicles, drivers become just passengers who do not participate in driving and do not pay much attention to the road. But likewise, it’s difficult for crossing pedestrians to tell if an autonomous car is seeing them without the familiar eye contact or hand gesture.

What’s the solution? According to scientists, throw puzzled looks at the car.

a pair of open eyes. Yes, two large remote-controlled robotic eyes. This is what researchers at the University of Tokyo want to incorporate into autonomous vehicles to make them safer. They came to this conclusion after conducting an experiment in which participants simulating an experience through virtual reality had to decide whether to cross the road in front of an oncoming vehicle.

Researchers recorded their choices and measured error rates; that is, how often they choose to stop when they can cross, and how often they cross when they have to wait. When the car was equipped with robotic eyes that focused on the pedestrian or looked away, the subjects made better decisions. 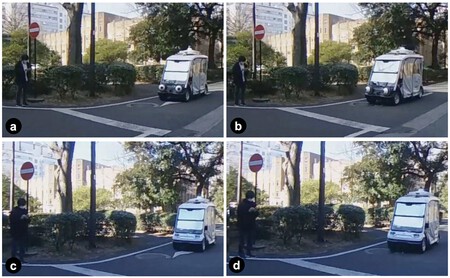 Results. Male participants in the experiment made much more dangerous decisions when crossing the road (choosing to cross when the vehicle was not stopping) than their female counterparts. But thanks to the “look” of the car, these errors were reduced. Female participants made more inefficient decisions (choosing not to cross the road when the vehicle wanted to stop), but these errors were also reduced by the same ‘look’. In other words, in both cases the eyes provided a smoother and safer transition for everyone.

Why? Why? Mainly because of how those eyes make pedestrians feel. It’s a way to warn you that there is life in that crossing car. That it’s not just an AI algorithm to be trusted blindly. Some thought they were beautiful, others thought they were terrible. Many men felt that the situation was more dangerous when they averted their eyes. For women, they felt more secure when eyes were focused on them.

But the idea of ​​​​installing this type of device in cars is quite distant. The transition to autonomous driving is an important step and people still need to get used to it. They can help us adapt to a variety of scenarios, whether it’s robotic eyes or similar systems. While their designs are clearly different, the researchers hope this work will inspire others to create similar concepts that improve the interaction between autonomous vehicles and pedestrians. In the end, the argument is always the same: machine less machine.